Kabul, Afghanistan—December 14, 2017—The Bayat Foundation (www.bayatfoundation.org), Afghanistan’s largest private, non-profit Health, Education and Social Development Organization, announced today that The Bayat Foundation has been selected by The Harmony Foundation as the recipient of the 2017 Mother Teresa Memorial International Award For Social Justice. 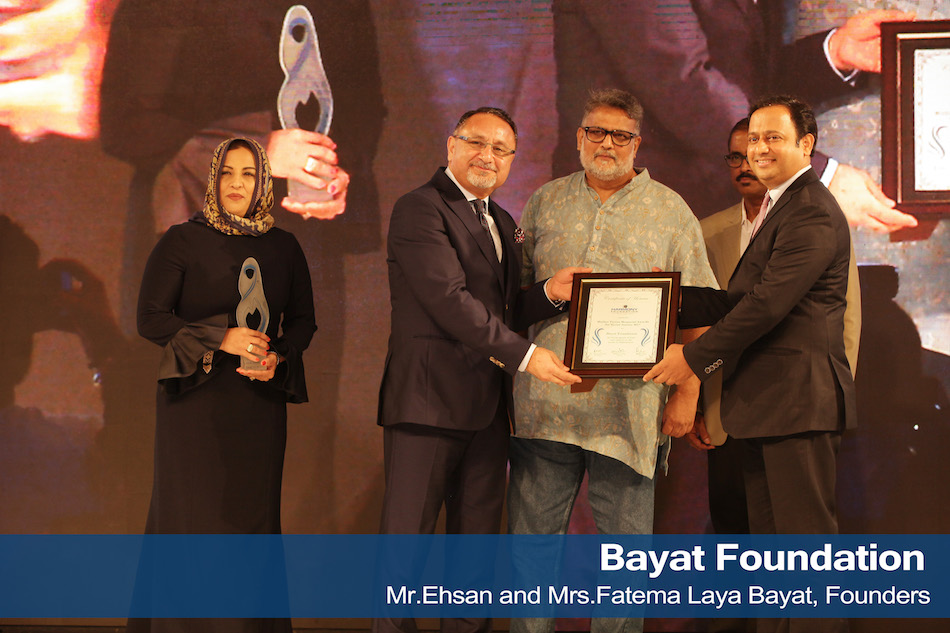 The ceremony was attended by a number of dignitaries such as Mr. Mohammad Sarwar Danish, Vice President of the Islamic Republic of Afghanistan; Ms. Yasuko Shimizu, Chief of Mission for the United Nations High Commissioner for Refugees; and Mr. Tushar Gandhi, great-grandson of Mahatma Gandhi.  Other 2017 honorees included Ms. Priyanka Chopra – Indian actress, singer, film producer, and philanthropist – and prolific Japanese architect and Pritzker Prize recipient, Mr. Shigeru Ban for his dedication to creating humanitarian designs that combine the needs of refugees with sustainability.

Established in 2005 by The Harmony Foundation to honor Mother (Saint) Teresa’s lifetime of service to the ‘Poorest of the Poor,’ The Mother Teresa Memorial International Award For Social Justice has been bestowed on Dr. Bayat and The Bayat Foundation, in recognition of The Bayat Foundation’s leading, exceptional and successful efforts to provide the neediest Afghans with food, clothing, health care, education, clean water and other critical and basic building blocks of life, that every human being requires for their protection, preservation and progress.

The Harmony Foundation was established in 2005 by Dr. Abraham Matai. The mission of The Harmony Foundation is to establish peaceful relations and social harmony between communities throughout the world. Prior recipients of Mother Teresa Memorial International Award For Social Justice, include His Holiness, The Dali Lama, Nana Akufo-Addo, the Former President of Ghana, Doctors Without Borders, and H.E. Bin Zayed Al Nayan, Minster of Foreign Affairs, The United Arab Emirates.

“Saint Teresa of Calcutta embraced the commandment to love, and serve, and improve the lives of the poorest of the poor, as the sacred work, and the sole mission of her life, and we accept the Mother Teresa Memorial International Award For Social Justice with tremendous humility and gratitude,” said Dr. Ehsan Bayat, the Co-Founder and Chairman of The Bayat Foundation.

“In 2006, when my wife Mrs. Fatema Bayat and I started The Bayat Foundation, we had a simple, but powerful wish—we wanted to help provide Afghans with healthcare, education, clean water—the basic necessities of life,” Dr. Bayat said.

“Today, I am proud to note that The Bayat Foundation has sponsored over 300 projects in Afghanistan, including the construction of thirteen hospitals, which have cared for 2,000,000 Afghan mothers and their children” Dr. Bayat said. “We have been blessed by this opportunity to serve Afghans, and every day we try our best to live out the wisdom that Mother Teresa gave to the world, when she said ‘The Greatest Good is what we do for one another.’”

About the Bayat Foundation:

Since 2005, the US-based Bayat Foundation, a 501 c (3) charitable organization, has promoted the well-being of the Afghan people. Founded and directed by Ehsanollah Bayat and Fatema Bayat, the Foundation has contributed to more than 300 projects dedicated to improving the quality of life for the youth, women, poor, and elderly of Afghanistan; including construction of 13 maternity hospitals that have now treated over 2,000,000 mothers and babies.

Projects have included the construction of new facilities and sustainable infrastructure in needy regions, and the promotion of health, education, economic, and cultural programs. In addition to his charitable initiatives, Ehsanollah Bayat founded Afghan Wireless (AWCC) in 2002, which was the first GSM wireless and Internet Service Provider in Afghanistan, and later established Ariana Radio and Television Network (ATN), which includes Ariana Radio (FM 93.5). For more information, please email info@bayatfoundation.org.